Does the simplification of the battery pack's geometry affect solution accuracy and simulation time?

In our last article (What characterizes different equivalent circuit cell models) we have explained the impact of different equivalent circuit models. In this article, we will take into consideration the influence of the mounting parts and electrical components of the battery module on the dynamic temperature distribution in the cells. An example presented below allows for a better understanding of the topic.

CFD is a powerful tool to investigate the fluid dynamic behaviour, which allows the user to get high accuracy prediction of the analysed problem. Despite the many advantages of it, there are some limitations, including a long simulation run time. To accelerate computations in commercial software, it is a common practice to simplify the model geometry as much as we can. It allows decreasing the size of the meshes, resulting in a smaller number of unknowns, thus a shorter simulation time.

In the case of modelling a battery pack, it is not quite obvious which parts of it can be omitted. The elements made from materials having low thermal conductivity, for example, the plastic holders or the fibreglass plates, are not relevant in the heat exchange process and can be excluded. However, the battery pack also consists of components made from metal which are good thermal conductors, for example the connectors, the casing or the thermal pads.

So does the more complicated geometry influence the simulation solution? To answer this question, we use a simple example.

Case study: a cooling process of a complex and a simplified prismatic cell battery module

Let’s consider cooling two battery modules, each consists of 6 cells connected in series (6s1p). The first case is simplified, as it consists of just cells, a simple aluminium casing, and a cooling plate with an S-shaped pipe at the bottom. The second one is more complicated and consists of cells with two terminals at the top connected with the copper connectors, an aluminium casing with the holes at the sidewalls, and a cooling plate with the S-shaped pipe at the bottom, which are modified to limit the amount of material. The geometries are shown in Figure 1. 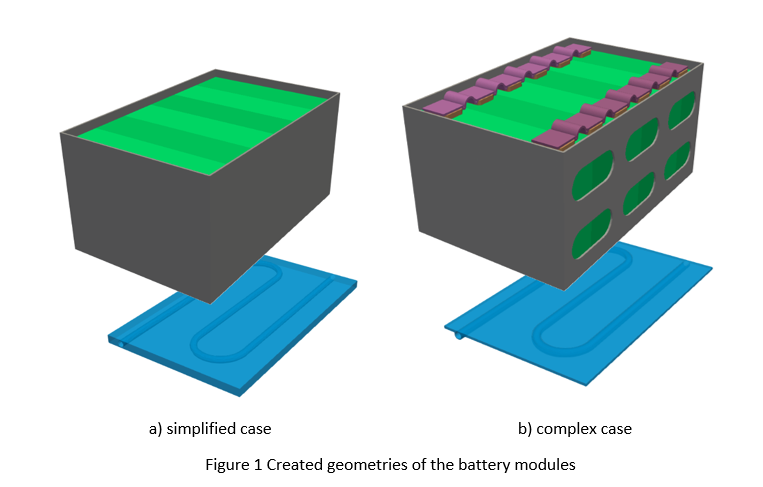 The water-glycol mixture is used as the coolant. The inlet mass flow rate and temperature of the coolant are specified to 0.009 kg/s and 15 deg C. The initial temperature of the whole battery pack is 20 deg C. The battery is modelled as an RC equivalent circuit model. We will simulate 16 minutes of battery usage in Q-Bat simulation software, which uses the model reduction method.

The comparison of the obtained results is shown in Table 1. The differences in the temperatures are not significant between the models. Reduction and run time are lower for the simplified model. Nevertheless, the run time of the complex model is only slightly higher than for the less complicated one.

In Figure 2 we present the solution of the temperature fields of battery modules and cross-sections of them. 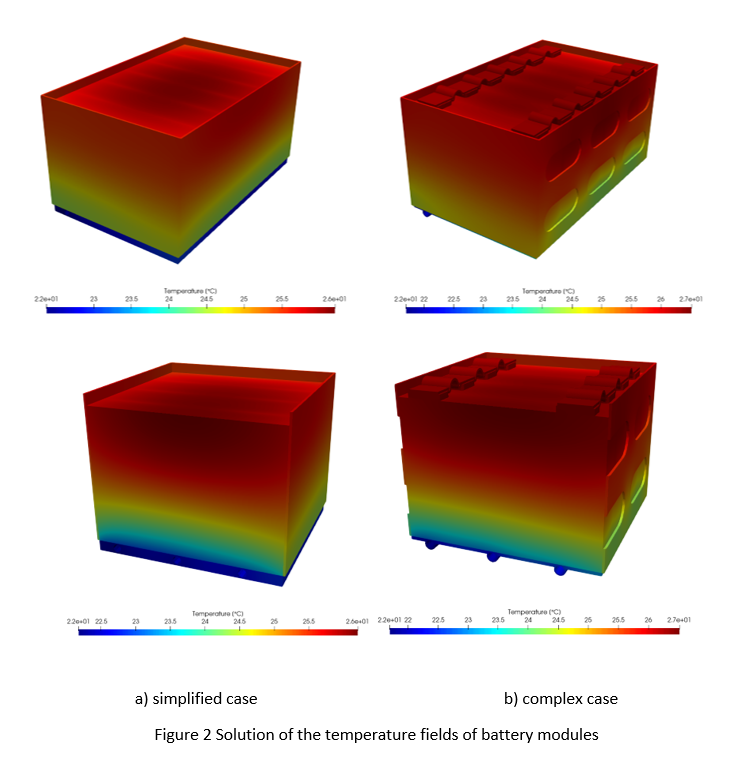 In this article, we have discussed the impact of more complicated elements in the model on the temperature distribution in the cells. We have presented that for modelling a battery pack, which has a much more complex geometry, our Q-Bat simulation software, can be as fast as for a simplified model without sacrificing accuracy.